Skip to content
In this post, I describe my experiments and attempts to build a custom computer rig for my podcast production and occasional editing. This turned out to be a mini beast with 24 Gigs of DDR4 RAM and 3.2 Terabytes of Storage space. The desktop runs well on Manjaro Linux and I am quite happy with the way things turned out. > In case you are wondering about the title, here is an interesting explanation for the term “Everything But The Kitchen Sink”

Background: Do It Yourself Computer Upgrade at Home My original aim was to use as many of the storage disks available in my home (and lying idle) for this project. Below is the outcome at the time of writing this post.

How it all began

When we began gaathastory in late 2015, I used a 2007 Dell Latitude D520 laptop. This machine (which still runs fine, by the way) – had Windows 7 on it. It was promptly replaced with Linux. For first 6 or 7 months in 2016, nearly every episode of Baalgatha, MyKitaab and other podcasts were recorded using this computer. For editing, we used a mix of external editors and yours truly (I learnt audio editing using using Audition as well as Audacity). From Mid-2016 till late 2021, my trusted 2015 MacBook Pro (MBP) excelled at recording and editing functions. But then something happened that required me to look for a production machine with some more horsepower. Not that the MBP was lacking in any functions or features- I had even upgraded its disk : but a more dedicated machine for solving the below issue was needed.

Workplace was ready and (avail)able

Back in 2019 when we were doing the interiors for our new home, I had specifically asked for a two level workdesk- a standing desk at that. I leave you with a picture from back in the day to show you what I mean. So the workplace for the workstation was not an issue. Now, coming to the problem at hand:

>Not a sob story, but a lifelong experience! Last year, we moved audio files from Host A to Host B. Host A had programmatic ads embedded into our podcast files, which got pulled into Host B while migrating the RSS feeds. So now I am cleaning up over 1,000 podcast files, replacing them one by one on Host B. Host B does not support HTML codes in the episode description either, so I have to update the text metadata also :-).

I purchased a used Lenovo ThinkCentre M900 Tiny after much research and checking reviews on YouTube- particularly from the Server To Home Project. (Thanks Chris and Team!). The machine served the basic purpose well, and had slots for 2 hard disks- a SATA drive and an M.2 slot for either SSD or NVMe. After much R and D, one 500GB Crucial NVMe drive and one 480 GB Kingston SATA SSD drive made the core of the storage.

Over the years, I had accumulated a few had drives of varying vintage, technology and capacity. I was really looking for a new computer without a hard drive. A new purchase meant more storage drives, and the problem of using the old drives remained. The ThinkCentre came with a drive as well (described below) but it has two slots for disk drives, and six USB 3.0 slots, which means there was a possibility of using some, if not all of the disks.My aim was to use as many of the above disks as possible. I succeeded in using all of the, excluding the last two MicroSD cards. And believe me, I did try to use them in the “Kitchen Sink.” The Vyas “Disk Collection” as on December 1st, 2021 was as follows:

This lofty goal was not without its challenges. Disks Aweigh! First of all, installing so many disks in the computer means that the power draw would increase significantly. The stock 65W power adapter was woefully inadequate to handle the power draw from so many disk drivers. This was solved using two means: – Purchasing a 90 W power supply from Lenovo’s OEM supplier. This helped power the Two disks on motherboard, as well as 3 external USB disks (the 1.5 TB Seagate, the 300 GB Seagate and the 500 GB WD SATA). – Using a Dual power (AC + USB) 4 slot USB adapter. One SATA SSD disk (the 256 GB Hynix) is now powered using this.

Next came the issue of cable management, both internally and externally. With so many devices attached to the computer – 2 display monitors, USB adapter, power supply, USB Microphone, headphones… not to mention the USB disks, the ThinkCentre was bursting at seams with the cables. Concealing the cables in the acoustical foam or the wall was one option. The other was to stick everything into a desktop chassis. I chose the latter option.

Most of the components you see in this image are now inside the Kitchen Sink Desktop!

The whole experiment began with cable management, which is still not achieved to 100 percent satisfaction

Putting it all together

I purchased a small-ish Silverstone computer case and literally put everything in there that I could. I did a trial run with connecting all the pieces together, and using masking tape and a temporary adhesive tape (the hideous white tape you may see in some of the images)

Drilling hole in the chassis

Even the SilverStone case was not offering the best solution, but it was a step in the right direction.

An old chess piece put to good use!

I have never used lights inside a desktop chassis: The last time I had used a desktop was in 2009, and it was the typical white box case with no custom mods, etc. Over the years, I have seen people get really creative with their desktop chassis. And foe this custom rig, I thought of giving it a try. Went with a vanilla white LED instead of colours- and I thought it worked well. But not to my linking. I prefer a dark case. Or down the line I might install a coloured LED. Time will tell.

This is how the setup looked like in December, now it has been superceded.

As of end of January 2022, I have moved the setup back to a single screen, the 21 inch Lenovo Monitor. During the next upgrade (read about the Processor in the FAQ Below) I might add one more monitor identical to the Lenovo’s 21 incher. The difference in display resolution between the two monitors was becoming a pain in the rear end. . Time will tell. That’s the long and short of it! Starting early next year, I have a shiny new machine to work on / work with.

A rather boring FAQ for the Do It Yourself Computer Upgrade at Home:

Why do I call it the Kitchen Sink Edition? – Because almost every storage disk in the household that was lying spare has been used up. Except maybe a MicroSD or two 🙂 Here’s an example. 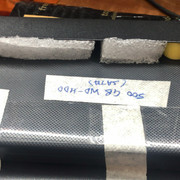 Is this the final version? – No, some better cable management and a better cooling solution. Used an old laptop fan – pad for cooling It Surprisingly works well though it is a bit noisy. Is this a production machine? – Yes! Quickly put this setup to use. Mostly for podcast editing. Will try recording in a few days. Spent the last 5 or 6 days un-doing some ghosts of the past- i.e. re editing over 300 audio files, re upload to media servers and fixing metadata. Battle story for another day. What about CPU and RAM? -The base system has an Intel 6700T 4 core processor, with3. Update February 2022: RAM configuration is actually 2 sticks – of 16 GB DDR4 3200 Mhz and DDR4 2133 Mhz. The combined system runs at 2133 Mhz as a result. I plan to reinstall the 16 GB disk in the Ryzen laptop as well. -Main function is audio/ light image editing, so this is more than adequate horsepower. -I might upgrade the CPU to an i7/7700 a year or two down the line. (The Mother Board supports that, though not officially) What is the medium term plan with this system? – I have a new Workplace for 2022. Lets’ leave it at that. What does the disk setup look like? Below is the setup as on December 25, 2021: Note: The Raid partition will go away soon. Disks in use

I still have one 256 GB SATA M.2 SSD left to use – which I plan to use in due course of time. What do the guts look like? You do not want to see *my* guts, so assuming you are referring to the interiors of the Kitchen Sink Rig. – Something like this (the hideous white tape is now gone, it was meant as a temporary measure) 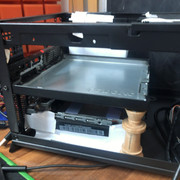 Does this setup run hot? – Outside temperature is 20 degrees C, and only on the CPU cooler, below are the temperatures Disk Temps Temperatures for other disks not available. In particular I am interested in checking temperatures for the hard drives. The 1.5 TB, the 300 GB (both Seagates) and the 500 GB Western Digital. During summer as temperatures cross 30 Deg Celsius, heating might become an issue. But I will work on a cooling system by then.

Trial of additional fans for cooling

What is the total storage for this setup? – Around 3.3 TB usable. The aim was to put almost every disk to use, not aim for maximum storage. The storage is the logical outcome. Had the primary goal been storage, I would have used 1 TB NVME as main drive, and left my wife’s laptop with the 256 GB SATA. What about power usage? – I upgraded the stock 65 W adapter with a 90 W adapter, and use an external dual powered USB adapter (AC + USB 3) for one disk and accessories. What about cost? -YMMV, depending on spare disk or RAM available. I would say overall around INR 70,000 or around 950 US Dollars. Difficult to calculate because the disks were purchased at different time periods (between 2017 and 2021). But going by the receipts, How long did it take to set this up? – Short answer: Too long. Since i Was trying this for the first time, I went into the “iterate and optimize spiral”. Setup, moving data around, experimenting with RAID… overall took nearly 40 hours over a month. – End to end you can finish the work in less than 20 hours or over a weekend. Depending on your stage / phase of life. What operating system do I use? Linux for the wider world, Manjaro for those in the know. The Lenovo came with Windows 10 installed, so I can always make this machine a dual boot. What about noise and dust control? – I have installed dust filters inside the chassis. Noise control is on the To Do. Depends mostly on what setup I use for cooling. Thanks for reading!Note: A live version of this document will be available at https://app.simplenote.com/p/RCHT9c This post was updated on 2022-02-18