The end of May is approaching and I have not published any new post for over two months now. Which does not mean I have NOT been writing- quite the contrary. But more on that later. Thanks for all the visits, comments and feedback in the meantime!

Spicing up this blog- Introducing Themes

While re-designing my blog site and author site, I thought of adding some method to help with my writing habit. I will publish post along pre-determined categories or themes for the blog themes. Each day will have a “Themes” or topics for every day of the week. You can track the progress of my writing by visiting this page.

I use the XFCE edition of Manjaro on RPi4. In this post, I will share my thoughts and experiences on using an external drive to boot up Raspberry Pi4. Also find results from benchmarks I have run on this setup.

In this post, you will find the results from running the YABS benchmark on a Storage VPS (Virtual Private Server). I signed up for this machine during the Black Friday 2021 offer by Hosthatch.This is my Second storage VPS with this provider, and Fourth overall.

My Reviews on amazon- January 2022

Below are a few reviews I left this month, for purchases made through amazon in December 2021. these include Logitech Wireless mouse, Shower Curtain and drain cleaner. All reviews need not be for technology stuff, after all!

Welcome to this mini travelogue and photo tour of our recent road trip.

We (Mrunal and I) covered several places in Karnataka between Dec 26th and 30th, 2021. It was a road trip that took a form of its own once we hit the road- figuratively speaking. The origin and the destination were known, and we had some idea about the places to visit in and around Gokarna (based on our previous 2018 road trip and recent recommendations from a few folks). But along the way, we added an extra day and a couple of destinations to our trip. More on that later. 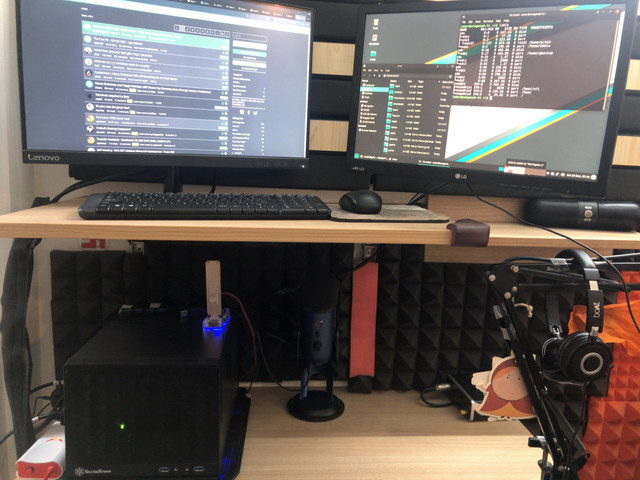 In this post, I describe my experiments and attempts to build a custom computer rig for my podcast production and occasional editing. This turned out to be a mini beast with 24 Gigs of DDR4 RAM and 3.2 Terabytes of Storage space. The desktop runs well on Manjaro Linux and I am quite happy with the way things turned out.

> In case you are wondering about the title, here is an interesting explanation for the term “Everything But The Kitchen Sink”

Do not throw away that old computer just it- it may have useful life left!

The beast surprisingly works rather well even in 2022 – nearly 15 years later! I recently had it serviced- fan is still noisy when it kicks in, but the rest of the system works well. The system originally supported 4 GB of RAM- 1 module of 2 GB is shot. But with a 1.67 Ghz dual core Intel CPU, 2 GB DDR 2 667 Mhz RAM and 120 GB of SATA SSD, the system shows no signs of ageing when I run ZorinOS or Manjaro Linux on it.

NATVPS from UK offered 1 GB VPS NAT for testing – more RAM and disk space compared to base case for NAT. But was curious to check how it fared.

GreencloudVPS had posted their offer on Black Friday 2021. I snapped up a storage server in Singapore. Below are results from benchmarks.

Installing WordPress on Debian using command line installers is quite a task. Almost every tool such as Webinoly, Slickstack or WordOps requires Ubuntu LTS (version 20.04 at the time of writing). But what happens when one really wants Debian 11 instead of Ubuntu? Read on

The installers for WordPress that are command line based- not yet ready for Debian 11- as on August end 2021.
Testing Webinoly, WordOps and Openlitespeed’s one click installer